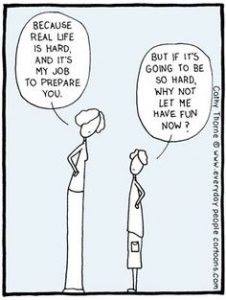 I think it was Quentin Crisp who once said: “The young always have the same problem – how to rebel and conform at the same time. They have now solved this by defying their parents and copying one another!”

It could be said that teenagers are the most misunderstood people on the planet. We often treat them like children and expect them to behave like adults.

As parents, we tend to ‘tell’ or impose our ideas on our children and we then wonder why our teenagers do their own thing; when what we actually want them to do is grow, learn and be the best they can be. Let’s face it how many of us like being told what to do; why should our teenagers be any different?

I have been an executive coach (sometimes called ‘life coaching’) for over 7 years; I see how coaching can help adults be the best they can be, particularly as it starts with the premise that the brain with the problem also has the solution – it just needs time to solve it.

I can remember using coaching techniques with my own teenagers and once you get past the rolling of the eyes and that withering look (that says you know nothing, and they’re right you don’t know anything about this particular issue), try asking them to expand on something they have just said with ‘tell me a bit more’. Then continue to use all those lovely open ended questions to encourage them to open up to you; finally saying to them okay what might you do to try to solve whatever it is they are grappling with. You might not get there on the first attempt (after all Rome wasn’t built in a day) but give it a go and remember to use why with caution.  Why? Well it can sound judgmental and we don’t want to go back to you telling your teenager …

If you are interested to know more about what I offer teenagers between 15 and 19 then check out my website launchfirst.co.uk and if you’ve got a teenager that is a bit stuck who may benefit from some professional coaching I’m starting a coaching programme in the holidays:

4-6pm every Friday starting on 28th July until 25th August

10-12 every Saturday morning from 29th July until 26th August

Both programmes will be held at The Old Fire Station, Salt Lane, Salisbury. SP1 1DU.

We're here to help kids who are becoming adults. Young people. It's a difficult time for some...parents too. We are here to help and are especially focused on training young people to develop a plan for their future.